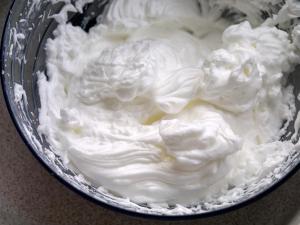 I travel to libraries to give workshops on allergy friendly and healthier baking. Last weekend, at a workshop, I spoke with a group of about 30, and I received an email this week with a follow up question about aquafaba.

If you have not heard about the new rage, aquafaba, it’s apparently the words for water and beans and refers to the liquid you find in a can of chick peas or after you cook dry chick peas.  The chemistry of the liquid is yet to be determined but what is known is that it makes for a wonderful egg and dairy substitute. You can whip it like eggs to make meringues or replace eggs in baked goods or mayo or waffles and more.  You can whip it like heavy cream to replace dairy in whipped cream, mousse, or ice cream and more.

For my workshops, I always bring samples so folks will know that I’m telling the truth about being able to “have your cake and eat it, too”, and I try to provide a variety of desserts which are gluten, dairy, nut, peanut, soy and egg free. Depending on the season, the particular items I bake vary. For this workshop, I made meringues with the aquafaba and a chocolate cream pie with an aquafaba topping so folks could see how the aquafaba worked as both an egg and a heavy cream substitute.

The participant in the workshop who had emailed me did so because she was looking for the meringue recipe which wasn’t actually on this site. So, I’m remedying that situation by including it below. *grin* I’m also including some other tips for how you can use aquafaba in recipes.

How to Make Aquafaba Meringues:

To make the aquafaba meringues you simply need a 15 oz can of chickpeas.  Drain the liquid into your mixing bowl and put the chickpeas in the fridge for another use.   Add at least 1/4 tsp and up to 1/2 tsp of cream of tartar.  Then add powdered sugar to your liking.  Start with 1/2 cup to 1 cup of powdered sugar. You can always add more later if you find it’s not sweet enough for you. Add 1 tsp of vanilla alone or with 1/4 cup of unsweetened cocoa powder if you want vanilla or chocolate flavor.

After you’ve put everything into your mixer, use the wire whisk handle to whip the aquafaba until it looks like the picture above.  It usually doesn’t take very long.  (When the peaks are still soft, check the sweetness to see if you need to add any more before whipping to stiff peaks.)

After it’s whipped to stiff peaks, put some into a gallon zip lock bag and snip off the end.  Preheat your oven to 250 degrees and line a cookie sheet with parchment paper. Using the ziplock bag, pipe meringues onto the parchment paper.  I usually make them about tablespoon size. I also like to make the meringues pretty by sprinkling a mixture of unsweetened cocoa powder and powder sugar on top of each meringue before putting them into the oven.

Once you’ve filled the cookie sheet with your meringues, pop them into the oven and bake them for at least an hour.  Then check them.  When they are done, they’ll be hard and dry.  If they’re not quite done, cook them longer for 15 minutes at a time until they are.  (If you make them tablespoon size, they’ll be done after an hour.  If you made them larger, they may take more time.)

Once they’re done, turn off the oven and let them cool in the oven for half an hour.  Then take them out and let them cool completely on a wire cooling rack.  When you go to take them off the parchment paper after they’ve cooled, carefully lift them off and place them into a tupperware, using parchment paper or plastic wrap to layer them.  They’ll keep for a good while in the tupperware.