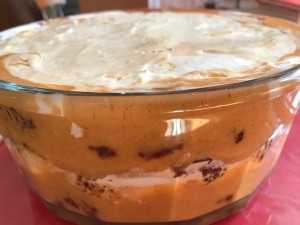 My youngest went trick or treating for the first time without his parents last night. He had fun with his middle school friends, trick or treating as a group, eating pizza at the Halloween party, playing games in the dark. He laughed and played and enjoyed himself. Then… he came home and cried because he realized the Halloween traditions of his last twelve years didn’t happen because he had gone out with his friends instead of with his parents. And as is typical with children on the autism spectrum, he made this blanket pronouncement: “Change is bad!”

Change is bad. How often do we feel and think that? Even as adults whose life experiences have taught us that change can be good, we can feel uncertainty and anxiety creep up on us when something in life changes. Often, the change has to prove its goodness as opposed to us believing its potential good from the onset.

As you can imagine, I took the time last night to speak to my son about the many changes he has had in his life which were good and pointed out that last night’s change enabled him to have a really good time with his friends which he wouldn’t have had if he hadn’t “changed” by growing and becoming a middle schooler who wanted to hang out with his friends instead of his parents. He, of course, remained skeptical, but I trust that, as with my older two, someday my words will resound as reasonable and not gobblygook.

For those of with food allergies that appear later in life, change can definitely seem bad. Suddenly, the foods we’ve loved, we can no longer eat, and we now have to learn a whole new way of eating which includes new foods, new ways of shopping, and creating new recipes. It can feel overwhelming and just plain bad sometimes. Trust me, I know! The last few months of accidents, family health issues, and two too many deaths have created food comfort cravings, and what I wouldn’t have given to be able to eat one of my son’s Reese’s peanut butter cups last night!

On the other hand, though, developing food allergies later in life has expanded my repertoire of new food experiences, new recipes, and new opportunities for being creative, to do a different type of work, for establishing new networks and relationships, and to add support to community life. The good outweighs the bad.

This week, we had apples and pumpkins from neighbors’ gardens as well as our own to use up, so I decided to “change” what I usually make with apples and pumpkins (apple crisp and pumpkin pie) in favor of trying something new and different. So, I made an apple brownie, which is different from a chocolate brownie but tasty nonetheless, and a pumpkin gingerbread trifle because I had leftover gingerbread muffins from a workshop. Both treats were thoroughly enjoyed by the folks who benefited from my willingness to think that change could be a good thing!

eggs equal to 1/2 cup (2 or three, depending on the size of your eggs)

One thought on “Autumn Appetites: Apples and Pumpkins”