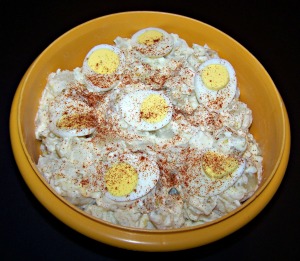 A couple of weeks ago, my oldest was home from college, so I asked her to help me at a concert my middle child was performing in. At the end of the concert she came to me in the concession kitchen and said, “I’m turning into you! I just did a sweep of the auditorium, cleaning up everyone else’s trash, and now I’m behind the counter serving cake to everyone!”

A parent who overheard my daughter’s remarks, commented on what she had said, and it sparked a conversation among a few parents about the types of folks who helped behind the scenes. At one point, someone said, “No one thinks much about the custodian until he’s out sick, and the trash isn’t emptied.”

I was reminded of that comment this weekend as I prepared food for a cookout we were going to have. I had asked my middle child what she thought I should make to go with the burgers, hot dogs and chicken, and she replied, “Potato salad.” Her answer surprised me because she doesn’t like potato salad.

When I questioned her about her reply, she said, “It’s a barbecue. If you don’t have potato salad, people will ask where it is.” As I thought about what she said, I realized, she was right. No one has ever asked me to actually make potato salad, but there have definitely been plenty of times when I’ve had a barbecue without potato salad where someone has said something like, “Oh, no potato salad, huh?”

Potato salad, however, is a dish which folks should consider with more thought. Potatoes are high in fiber if you eat the skin, have nutrients like potassium and vitamin C, and are a good source of complex carbs. Potato salad in particular is nice because it can be inexpensively made, easily stretched to feed a crowd, and can be made in a variety of ways to suit different tastes. Potato salad is also very allergy friendly because unless you’re allergic to potatoes, how you choose to dress it and what additions you add can easily be done around any food allergies you might have.

1. Type of potato: The choices abound for potato salad. Traditionally, potatoes are categorized as starchy (think Idaho potatoes), waxy (think red potatoes) or all-purpose (think Yukon-Gold potatoes). Starchy potatoes fall apart easily, so if you prefer a creamier, more mashed type of potato salad, these work best. Waxy potatoes hold their shape well, so if you prefer a firmer potato salad with squares of potato to bite into, you’ll want to use these. If you’re looking for something in between, all purpose potatoes are just the thing. You can also mix different types of potatoes which is what I do, because the starchier potatoes form a creamy base for the firmer waxy potatoes which provide something to bite into.

2. Potato cooking method: There are basically three ways to cook potatoes for potato salad – boiling, baking or high heat roasting. If you prefer your potatoes to be a little wetter, boil them. If you want them to be fluffier, bake them. If you want a concentrated potato flavor, roast them.

If you want your potatoes to have a firmer texture while boiling, mix the water with vinegar, about 2 tbsp for every 2 cups of water you’re using. If you bake the potatoes, you can choose whether you want to scoop the insides out of the skin or make the potato salad with the skin. If you roast the potatoes, the crunchy skin adds a nice complexity to the potato salad.

3. Additions to potato salad: Anything goes with potatoes. You can add vegetables of any type – celery, zucchini, carrots, cucumbers, tomatoes…. You can add meat – sausage, bacon, chicken, eggs…. You can add fruit – apples, pears, mangos…. You can add cheese. The only limit is your imagination. Experiment and see what you prefer taste-wise.

4. Seasonings: Potatoes are versatile. You can flavor them as you’d like. Dill, oregano, thyme, rosemary are more traditional. Cumin or coriander or turmeric add a new and different taste. Paprika and black pepper and parsley and dry mustard are always good favorites. As with the additions, experiment and see what your taste buds like. Adding leeks or chives or garlic punches up the flavor. Sticking with just salt and pepper allows more of the potato to come through. Adding something like a zucchini relish adds a twist to the flavor. What’s great is that you can choose.

5. Dressing: Dressing the potato salad is always fun. You can make a creamy dressing which usually utilizes ingredients like mayonnaise or yogurt or cream cheese or creamy salad dressings or sour cream. You can also make a vinaigrette dressing which uses plant-based oils like olive oil or safflower oil mixed with vinegars like red wine or apple cider or white. Sometimes I like to simply add fresh lemon juice to slightly mashed potato salad, and it’s quite lovely.

6. Garnishes: When you’re ready to serve your potato salad, it’s always nice to add a little something because the flavors, though, they meld in the fridge, do tend to flatten out a bit. So, give your potato salad a good mixing after you remove it from the fridge, and add a little something to freshen the flavor, whether it’s a little bit of mint or chopped up pieces of bacon or a little more dressing or a drizzle of fresh lemon juice. And then enjoy!