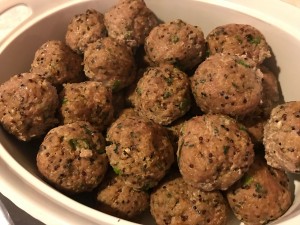 My oldest decided a few weeks ago to do the elimination diet, which basically is eliminating everything except meat, poultry, fish, and non-starchy vegetables from one’s diet. She could not eat wheat, soy, dairy, nuts, peanuts, eggs, sesame, corn, peppers, potatoes, vinegar, yeast, sweeteners of any type, etc…, which meant dinners became a bit more complicated.

Since I usually include non-meat protein in many of our family dinners, I had to rethink our meals for a few weeks to make sure we were not eating too much meat and chicken. Obviously, eating more fish and beans was one solution, but the number of fish or bean dinners we currently eat are not my husband’s and son’s favorites as it is, so I did not want to create issues there. We could increase our vegetable dishes, but not being able to add any cheese, whether dairy or soy, or add tofu meant having no protein at all, which does not work for my or my daughter’s hypoglycemia.

So, as I thought about eating more meat and chicken dishes, it occurred to me that I could rethink weeknight pasta dinners, which is a staple for most families. Pasta and sauce is quick and easy for those busy nights when families do not have much time to pull dinner together. For my purposes, pasta and sauce was also a good dinner to be able to alter for our dietary needs.

For the pasta, we simply opted to substitute many of the grain free, protein packed pastas which are on the market: red and green lentil, chickpea and bean pastas are easily found at most supermarkets and are actually quite tasty. The ingredients are literally just red lentils or chickpeas or beans. Nothing else. So, for folks who need to watch ingredients, these pastas are great one ingredient pastas. (NOTE: there are pastas which mix flours with legumes to add protein. These are fine, too, if folks can eat grains.)

For the sauces, the solution was simple: substitute half of any meat or chicken with vegetables or quinoa. That way we had the protein but not as much of it. The result were healthier sauces which were just as filling but with less meat and poultry. Some of the pasta sauces and meatball recipes we made are below in case any folks want to try them for themselves.

In a large skillet, brown 1/2 lb of lean hamburger meat with finely chopped onions, garlic, and herbs such as oregano, basil, black pepper, and thyme. Drain the fat from the meat and add 8 oz of frozen riced beets, one cup frozen chopped spinach, and a 16 oz can of no salt, no sugar added petite diced tomatoes. Saute until most of the liquid from the tomatoes has evaporated. Add a jar of your favorite spaghetti sauce (I use Victoria’s which literally only has tomatoes, garlic, salt oregano, and onions as its ingredients). Heat until warm and serve over a protein based ziti style pasta.

In a large skillet, brown 1/2 lb of lean ground turkey with finely chopped onions, garlic and herbs such as oregano, thyme, basil, and black pepper. Drain the fat from the meat, and set aside. In the skillet add 2 tbsp olive oil. Heat the oil for a minute and add 1/4 cup of a gluten free flour like GF oat or sorghum or millet. Stir until well mixed with the oil. Add 2 cups of a no salt, turkey bone broth, stirring and cooking over medium heat until it begins to thicken. Flavor the sauce with herbs like oregano, thyme and basil. Add the browned turkey, 8 oz frozen chopped kale and one cup grated carrots. Heat until the kale and carrots are soft and fully cooked. Serve over a protein based spaghetti style pasta.

Mix one pound of ground beef, chicken or turkey with 2 cups of cooked quinoa. Add to taste: chopped green onions, minced garlic, black pepper, oregano, basil, thyme, dill, and onion powder. Form into quarter cup size meatballs and place the meatballs on a pan lined with aluminum foil and lightly greased with olive oil. Preheat the oven to 375 degrees. Bake the meatballs for 25 minutes until browned on top and cooked through. Serve with your favorite sauce and protein based pasta.