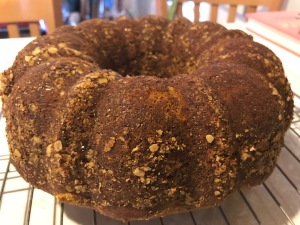 I am continually amazed by just how many items there are on the market these days for folks trying to eat healthier and/or allergy friendly. Just a decade ago, I was driving distances to little, out of the way, specialty stores to try to find this or that. Now, I walk into the grocery store, ten minutes down the road, and every week, something new is on the shelf.

Recently, a friend asked me if I had ever tried monk fruit sweeteners since she knew I didn’t bake with sugar. Since I had not actually tried it, I thought I’d research it and give it a try.

Some things for you to know about monk fruit sweeteners:

For the pan and streusel: