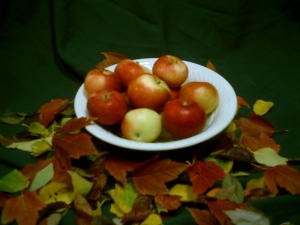 “What do you mean we’re out of baking powder?”

My younger two children and I were busy, baking a variety of quick breads for a luncheon we were hosting the next day.  Their favorites were on tap:  chocolate chip date bread, pumpkin, a gluten free banana bread, and a lemon poppy seed.

The kitchen held the evidence of our hard work:  flour scattered on the counter top and kitchen stools – courtesy of my son; millimeter tabs of butter sticking to the kitchen aid and measuring spoons – my daughter’s workmanship; and measuring cups and ingredients cloistered in the center – my attempt at providing some measure of organization and neatness to the mess.

All had been going well with two of the four breads in the oven and our attentions turned toward the last two breads when my daughter said, “We’re out of baking powder.”

“I used the last bit in the pumpkin bread.”

“So, why didn’t you tell me BEFORE we started making the banana bread?”

That last statement, of course, was presented with the traditional shrug and vacant expression we moms have come to associate with such an explanation from our children.

Fortunately for my daughter, I know a trick or two, and we were able to finish preparing the last two breads despite running out of baking powder.

Chances are that you’ve had a similar experience sometime in your life of cooking. You’re halfway into a recipe and suddenly realize you’re all out of a key ingredient. Sometimes you haven’t begun cooking but would really like to make something which requires an ingredient you don’t currently have in the house.

What can you do?

Do you have to stop cooking or forget making that particular recipe?  The answer is usually, “No,” because chances are good that you actually have what is necessary to substitute for most key recipe ingredients. If you google the ingredient you’re missing, you’ll find a whole host of online recommendations for substitutes, but a few of the more common culprits are listed below.

2.  The recipe calls for buttermilk which you don’t buy:  Whenever a recipe calls for buttermilk, you can make your own.  Simply add 1 tablespoon of vinegar or lemon juice to 1 cup of your type of milk (cow, soy, rice, etc…) and let it sit for five minutes.  It’ll thicken up, and you can simply stir and use whatever amount you need for your recipe.  You can also mix 3/4 cup of yogurt with 1/4 cup of milk or 3/4 cup sour cream with 1/4 cup milk.  Again you can choose simply by what you have in stock or by which you’d think would taste best in your recipe.

3.  You’re baking, and you’re completely out of eggs:  No worries.  1 tablespoon of ground flaxseed mixed with 3 tablespoons of water is equivalent to one egg.  If you don’t have ground flaxseed on hand, 1/4 cup of a pureed fruit or vegetable like applesauce or pumpkin will substitute as an egg binder.  If the egg is acting as a leavener in your recipe (like for a cake), you can replace the egg by adding an extra 1 tsp of baking soda to your dry ingredients and mixing in 1 tablespoon of vinegar as the last ingredient to the batter.

4.  The recipe wants you to use milk but you’re out:  If it’s a baking recipe like a cake or cookies, you can always use another liquid like fruit juice or even water.  If you’re making something like a soup that uses milk simply as a liquid, you can substitute a vegetable or chicken broth or water seasoned with herbs.  If you’re making a dish that uses milk to make it creamy and thick, you can substitute cooked pureed vegetables in an equal amount.  If you’re baking something that needs the milk to give it density and thickness, substitute yogurt or sour cream, but reduce your fat (butter, oil, etc…) by about 1/4 cup.

5.  You need sour cream but you never buy it:  You can substitute yogurt which you’re more likely to have but for every cup of sour cream you’ll use 1 cup of yogurt mixed with 1 tablespoon of flour.  You can also substitute using 3/4 cup of a homemade buttermilk and adding about 1/3 cup of a solid fat (butter) to your recipe.

6.  You’re completely out of yogurt:  Substitute one cup of sour cream or homemade buttermilk or pureed cottage cheese for every cup of yogurt needed.

8.  The recipe wants you to use molasses or honey instead of sugar which is all you have or vice versa:  1 cup of molasses is equal to 3/4 cup of sugar and 1 cup of honey is equal to 1 1/4 cup of sugar.  What’s important to remember is that molasses and honey are wet ingredients verses the dry ingredient sugar.  So, if you’re adding molasses or honey instead of sugar, reduce another liquid ingredient by at least a 1/4 cup. If you’re substituting sugar, make sure to increase the liquid by at least a 1/4 cup.  For all three you can always substitute half the amount of Agave remembering to reduce the liquid by 1/2 a cup if you’re using the Agave for the dry sugar.  You can also use 1/2 the amount of Truvia for sugar.  If you substitute Truvia for the molasses or honey, be sure to increase your liquids to adapt for the loss in wet ingredients.

10.  Your recipe wants you to use a certain type of meat, vegetable, bean or whatever and you only have another type:  Go head!  Substitute!  Use what you have.  Just be sure that what you’re using is comparable. For example, salmon, halibut and tuna are all fish with similar texture, thickness and cooking time, while cod and haddock cook similarly, as does flounder, tilapia and catfish. For vegetables, substitute one root vegetable for another (carrots, turnips, potatos, etc…), a flower vegetable for another (broccoli, cauliflower, brussel sprouts, etc…) and make sure everything is cut to the same shape and size and thickness so your cooking times will stay the same.

Since I’ve had a couple of requests now for how I make apple pie and apple crips, I’m going to share those below.

1.  Put apples into a pan which allows them to be evenly distributed and cooked.

2.  Mix agave with lemon juice and spices and pour over the apples.

3.  Cook the apples over medium-low heat, stirring occasionally until the apples begin to soften and release some of their juices.  Usually about 15 to 20 minutes. They’ll lose that “raw” look and take on a slightly darker hue.

4.  Drain the apples, keeping the liquid and returning the liquid to the original cooking pan.  Cook the liquid down over medium-low heat until it’s reduced by about half.

5.  Mix the reduced liquid back in with the apples and set aside.

* Use apples which are good, crisp, sweet eating apples like honey crisp, juno gold, gala, braeburn, etc… which don’t need a lot of sweetening.  Regular pies and crisp tend to call for baking apples which are blander and that’s why the recipes call for two cups of sugar!  FYI:  A regular fist size apple will yield about one cup of apple slices.  The newer gigantic sized apples are usually about two cups.

(NOTE:  If you only have Macs or Empires or green apples, you can still use them, but since they are dry apples, you’ll notice that the liquid actually gets absorbed as they soften.  No worries.  Just skip steps 4 and 5.  Mac/Empire apples will soften more quickly than the crisp, eating apples.  Green apples will take longer.)

** I vary the spices.  Sometimes I just use cinnamon and nutmeg.  Other times I use ginger and cardamom.  Occasionally I use all four mixed together. Experiment to see what flavors you like.

1.  I use Bob’s Red Mill gluten free baking and biscuit mix recipe for pie crust, only I add 1 1/2 tsp cinnamon and 1/2 nutmeg to the dry mix before adding the water. My two tips if you’re going to use that pie mix, though:  The dough usually needs a bit more water than they say, and to roll out the dough, put your dough between two pieces of wax paper.  It’ll roll out nicely and you can easily pull it off when you put the dough into the pan or as the top crust.

2.  After you’ve put your bottom crust into your pie pan, give the apples a good mix before layering them carefully one on top of each other in circle in the pie crust. Be sure to pour off any leftover liquid over the top of the apples when you’re done layering them.

3.  Cover the apples with your top crust and fold your edges in whatever manner you prefer (pinching, forking, free-style).

4. Melt a tablespoon of vegan butter and mix it with 1 tsp agave and 1/2 tsp cinnamon.  Brush the crust with the mixture, put in steam slits, and cover the pie edges with an edge cover or with aluminum foil.

5.  Bake for 35 to 40 minutes in a preheated 375 degree oven until the crust is browned and the apples are bubbling.

1.  Mix the apples and liquid one last time before placing into a 9 x 13 pan.

3.  Cut in with a pastry blender 1/2 cup vegan butter to form a crumbly mixture.

5.  Using your clean hands, crumble the oat mixture evenly over the apples.

6.  Bake for 15-20 minutes in a preheated 350 degree oven until the topping is browned and the apples are bubbling.