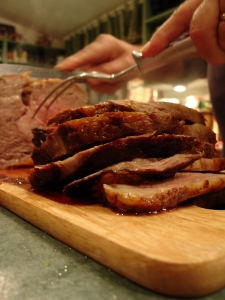 Imagine that you’re meeting your future spouse’s parents for the first time. They’ve invited you over for Easter at a cousin’s home and the cousin raises sheep. You’re already nervous because you really want his parents to like you. However, you now learn that, you who are a vegetarian, are about to be served lamb for Easter dinner. More so, the family has just had a lengthy conversation about the best way to cook lamb which apparently is to simply torch the outside a bit while leaving the lamb mostly rare.

You’re expecting the worst, but nothing prepares you for actual reality. When the lamb appears, you glance at the platter and see what looks to you like blood running in riverlets down the lamb’s sides. Your stomach, which has already been lurching horribly due to nerves, can’t take this unexpected sight, and you promptly run from the table and spend the next half an hour incredibly sick in the cousin’s bathroom, wondering if you’ve doomed your chances of ever impressing your future in-law’s.

I, unfortunately, don’t have to imagine the above scene, because I lived it. That experience, though, solidified a few things for me. One, I have never entertained without making sure that everyone who is coming will be comfortable with what I serve. Two, no new experiences where folks have made a dish I can’t eat has ever come close to topping that one, so I’ve been able to handle them with much more aplomb. And three, I’ve learned that when it comes to food, everyone’s tastes are different, and we have to be accepting of that.

So what do you do when you need to cook a main course that accommodates your health needs and is delicious for everyone who gathers at your table who may not need to watch what they eat?

2.  Forget the fat and focus on the cooking:  The mantra is that meat and chicken and turkey need the fat to taste good, but that’s not actually true. Whether your meat or turkey or chicken is dry and tasteless really depends on your cooking technique.

For meats and poultry, the key to seasoning is to do it everywhere.  Make a rub of herbs and spices and onions and garlic with just the tiniest bit of an oil like olive oil to create a paste and rub it everywhere.  For the meat, you can even put little slits into the meat and put seasoning into.  For the birds, use your hands to pull the skin away from the flesh and put the herbs in between the skin and breast as well as on top and inside the bird.  For inside, add an onion or garlic cloves or veggies like carrots and celery for even more flavor.

Cook the meats and poultry to maximize moisture.  Cook them on high heat for only 10 minutes to get the outside crisp immediately, then tent them with foil and cook on low heat for more even cooking. At the end you can cook them for another few minutes at high heat to finish them off with a nice brown crust or skin.  For folks who are extra wary, you can also use a reduced sodium, fat free stock to baste meats and birds during the cooking process.

Finally, let your meats and poultry rest after cooking.  If you let them sit for at least 15 to 20 minutes, all the juices which have been released will be reabsorbed into the meat and poultry, to allow for moister slices when you do cut them into pieces.

For tender cuts like a pork tenderloin or turkey tenderloin, just trust the meat. Once you season it with your herbs and spices, you can simply cook them at 350 for an hour, and they’ll taste great.  You choose to make a nice glaze to brush on instead, too.

For ham, you can omit the glazes that come packaged with the meat, and either cook it without or make your own less caloric version and just cook the ham according to instructions.

3. Make it yourself: If you’re making something like chicken cordon bleu, make your own bread crumbs. Whether you use 100% whole wheat bread or a gluten free millet bread, you’ll add more fiber to the crumbs which is good, and you can then season the bread crumbs as you’d like without all the salt. Contrary to thinking, it literally takes about two minutes to make your own crumbs.  A couple of tips:  For gluten free bread, use frozen slices.  For both breads, if the bread is already at room temperature, toast them on the lowest setting and cool before processing. If adding herbs and spices, throw them in with the slices you’re about to zoop in the processor, because that will meld the herbs and spiced into the crumbs.

If you’re supposed to use a certain type of bottled glaze or marinade, find a recipe that you like and modify to omit the salt and sugar and fat, using the tips I’ve put into past posts.

If the recipe calls for a bottled spice that includes salt, create your own mix, using herbs and spices from your cabinet which you combine with onion and/or garlic powder and black pepper.

4. Look for better options: If you’re making something like a stuffed, rolled pork tenderloin and the recipe calls for crumbled sausage, use a turkey variety. If you’re supposed to use cheese, find a lower sodium, reduced fat variety or a vegan substitute instead. If the recipe calls for ham and you really want to use ham, use half the amount and slice it into smaller pieces to distribute the taste throughout something like a cordon bleu. If you’re supposed to use meat to stuff a meat, try using sauteed vegetables instead. If butter is required, use a heart healthy and dairy free oil instead.

5. Think outside the box: Maybe this is the year you don’t make a chicken cordon bleu or ham for Christmas. Maybe you created a stunning whole wheat or gluten free roasted vegetable lasagna. Or maybe you make a spanikopita, only you use olive oil instead of butter and lower fat cheeses. Or maybe you try your hand at a vegan manicotti which used vegan cheeses and pureed cashews and is stuffed with butternut squash.

(This is for four chicken breasts; we always double the recipe and use a 9 x 13 pan. If you aren’t allergic to dairy, you can use low fat real cheese!)

4 chicken breasts (smaller 4 to 6 ounce portion, not the huge ones!)

1. Lightly coat an 8 inch square pan with your choice of “grease”. (I usually brush a very light coat of olive oil.) Preheat the oven to 350 degrees.

2. Combine the broth with the garlic and herbs and microwave for 20 seconds until it’s warm.

3. Combine the bread crumbs with the Parmeson and paprika.

4. Pound the chicken breasts to a uniform thinness.  (We put the breast between parchment paper and pound them with the bottom of a heavy ice cream scoop.  If you have a meat mallet, that works, too. Recipes will often tell you to pound between saran wrap. Do what works for you.)

5. Sprinkle both sides of the chicken breasts with the herbs of your choice and black pepper.

6. Place one slice of the ham, some chopped baby spinach, and 1 tbsp of the mozzarella on top of each chicken breast and roll up the breasts in a jelly roll style.

7. Dip the rolled chicken breasts into the chicken broth and cover with the breadcrumb mixture.

8. Put the breasts into the baking pan, seam side down, and pour the remaining chicken broth over the chicken breasts evenly.

9. Bake for about 30 minutes until the juices from the chicken are clear and the chicken is golden brown.

10. You can serve immediately or cover them with foil to keep warm until it’s time to serve them.