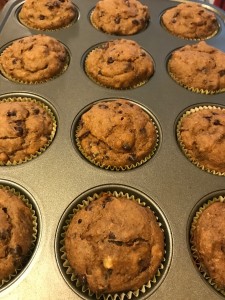 Last night we discovered that our fridge is not working as it ought. Specifically, the refrigerator part (but not the freezer) is not staying as cold as it needs to be to keep meat from being spoiled, and when I went to start dinner, I learned that the ground turkey I had bought had gone bad. Since it was close to dinner time, I opted to do what I usually do in a crunch… we had breakfast for dinner.

The children love when we have breakfast for dinner. Pancakes, waffles, sausages, bacon, eggs… these are some of their favorite foods. Given what we had in the pantry and the freezer, last night ended up being pumpkin pancakes and turkey bacon with salad as our veggies. This, of course, meant there were pancakes and bacon available for the children to eat again this morning for breakfast.

When our son went to get bacon to eat, he began to sing. It turned out it was the “bacon song” he was making up and singing. When we laughed, he switched to the “apple doesn’t fall far from the tree” and reminded my husband and me that we do strange things all the time!

In fact, I was just accused of oddness last week when I made dried plum muffins. Someone thought it weird that I would even use dried plums. Another wondered why I did not call them prunes. I explained that dried plums have a lot of fiber, potassium, good vitamins like K, A and B, and are naturally sweet so you don’t need to add sugar. The reason I call them dried plums is because that is what prunes are, and I find people react oddly when you say you’ve made something with prunes. Of course, I discovered that dried plum muffins received the same reaction, so it may not be the name!

The fact, though, is that the muffins I made are healthier muffins with rolled oats and flax seed and garbanzo bean flour, so in addition to having no sugar, they are higher in fiber and protein. The version below have mini chocolate chips because I was making them for a children’s party, but you can omit the chocolate chips and then serve them as a breakfast muffin!

1. Preheat the oven to 350 degrees and line 24 muffin cups with cupcake liners or grease them so the muffins won’t stick to your pan.

2. Mix the chopped dried plums with the oats in a bowl, and pour the boiling water over them, pushing the dried plums and oats down into the water so they are covered. Let sit.

4. Whisk together the ground flaxseed with the water, and set aside.

6. Mash the bananas and mix with the oil and the dried plums and oatmeal mixture and the flaxseed mixture.

8. Evenly scoop the muffin batter among the 24 muffin cups and bake for 15 minutes or until the cupcakes are golden and puffed and a toothpick inserted in the center comes out clean.

9. Remove the muffins to a wire rack and cool completely.  These keep well in a tightly covered tupper ware container.