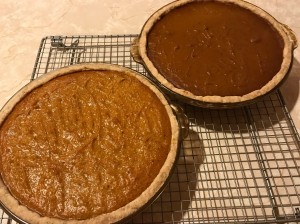 After posting the black bean-kale soup recipe, I received a question about pies. More than any other holiday, Thanksgiving tends to be about the pies. Pumpkin, apple, cranberry-pear, and mince meat tend to be the more traditional pies associated with Thanksgiving, but I have seen people put out other types like lemon meringue and chocolate pies as well. For today’s post, I’ll focus on the question asked which was for a vegan pumpkin pie, but below are links to other pies I’ve posted about in the past.

Making a pumpkin pie vegan is easy. For the crust, folks can simply substitute vegan butter, vegan shortening or coconut oil for the butter or shortening in any pie crust recipe without anything else needing to be done to the recipe.

For the pumpkin filling, the first ingredient which makes pumpkin pie non-vegan is the eggs, and in pumpkin pie, the eggs simply act as a binder, which is simple to replace. To make a pumpkin pie which is just like regular egg-filled pumpkin pie, the easiest substitute for the eggs is a flour or a starch. Most recipes you’ll find use cornstarch. Many folks, however, are allergic to corn, and I personally like to add protein and/or fiber if possible when I can, so I opt to use a gluten free flour like oat or millet or sorghum.

The other ingredient in pumpkin pie which is dairy is the milk, whether it’s evaporated milk or heavy cream which is used. To substitute for milk in a pumpkin pie, one can choose a plant based “milk” like almond or soy or hemp or flax or any other type on the market which you prefer.  Usually 1 1/2 cups of a “milk” is equivalent to a can of evaporated milk.

For folks who might want a slightly different pumpkin pie and who are not allergic to soy, I also make a pie using tofu which tends to be a heartier, more protein filled pie. Pureed tofu then acts as the binder which eliminates the need for flour, and the pie also does not require any “milk” at all.

For both types of pumpkin pie, I reduce the “sugar” amount substantially and use an alternative to refined white sugar – coconut sugar for the more traditional type of pumpkin pie and agave for the tofu pumpkin pie. Folks who have eaten my pies never say it’s not sweet enough and always comment on how the pumpkin flavor really shines.

Below are recipes for both versions.

2 tsp spices (I use a mixture of cinnamon, nutmeg, ginger, allspice, cloves and/or cardamom)

1/4 to 1/2 cup gluten free flour (use the lower amount for a more silky pie; the higher amount for a sturdier pie; I like to use millet or sorghum or GF oat flour to add some protein and fiber)

1/2 cup agave (I like to use the maple flavor agave for this pie; if you can’t find it, you can mix 2 tbsp of maple syrup with enough agave to make 1/2 cup – this gives you the flavor but substantially reduces the amount of calories you’d get from using 1/2 cup of maple syrup)

2 tsp spices (I use a mixture of cinnamon, nutmeg, ginger, allspice, cloves and/or cardamom)

16 oz silken tofu, pureed to be smooth and creamy